I definitely wanted to post about Daikaiju based on their personality alone.

“Daikaiju” name means “giant monster” in Japanese. Sticking with the Japanese theme, they wear kabuki masks on stage, which looks both cool and alien live. As well, song names often reflect the Japanese monster theme. Each band member is anonymous and go by the names secret man, rumble man, hands man, rock man, radiant man, and electro man (although it seems that they used to be only 4 guys).

Take a look for yourself:

The Japanese-surf theme is weird knowing that they are from Alabama, but whatever. Musically, they aren’t a classical surf band by any means, and include more of a distorted sound. But the music they’ve come up with is very cool. They’ve got 1 album out as far as I can tell and include some songs on their MySpace. One guitarist plays a Fender Strat, I’m not sure about the other one. 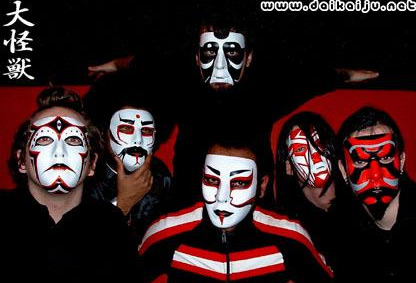 Tell us what you think of Daikaiju, or if you have some info on them let us know. Here’s another video to play you out, a little less of a stage show but higher quality: