The band of the week is a great group called the Vanduras. It reminds me of Vandelay Industries, so that’s already a good start.

The only album the Vanduras appear to have released was 2002′s In The Dark. The music is composed and most instruments played by father & son Geoff Brandin and Gary Brandin.

The album is hardly the up tempo, guitar-centric usual offering of the genre. It’s got a very laid back vibe, mixing ambient music, surf, and also western element. In The Dark is instrumental, with very prominent pedal steel parts, lending to the western feel.

I imagine the plan for the album went something like this:

“Hey I think we should do an album together.”

“OK. How about we play surf music?”

“Perfect. Hey do we have time to down some whiskey and pop a handful of Valiums before we go into the studio?” 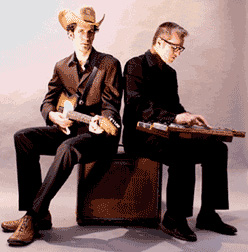 Just take a look at the band photo and guess what kind of music they play. How often do you see a Telecaster, cowboy hat and lap steel guitar in surf bands?

Interestingly, Gary Bradin is also in a well known contemporary surf band, the Blue Hawaiians. They are definitely worth checking out as well, and we will certainly write a post about them in the future.

Let us know what you think of the Vanduras.