What is Surf Music?

Sometimes when listening to a band, I wonder if it qualifies as “surf music.” So we’re going to try and answer the question of “what is surf music” here.

We’ll start with a look from ye old Wikipedia for a definition:

Surf music is a genre of popular music associated with surf culture, particularly Orange County and other areas of Southern California. It was particularly popular between 1961 and 1965, has subsequently been revived and was highly influential on subsequent rock music. It has two major forms: largely instrumental surf rock, with an electric guitar or saxophone playing the main melody, pioneered by acts such as Dick Dale and the Del-Tones, and vocal surf pop, including both surf ballads and dance music, often with strong harmonies that are most associated with The Beach Boys.

So there we have a basic definition. We focus mostly on the instrumental form on this site, so let’s look into that further. Here’s a little more on the types of sounds heard in instrumental surf music from Kahuna Kawentzmann, formerly of the German surf band The Looney Tunes:

Taken in context of the music at the time, it’s interesting to look at how it evolved separately from similar music. A lot of influential rock music was coming out at the time, which splintered off indifferent directions. Leonard Lueras in Surfing, The Ultimate Pleasure writes:

Transition artists such as Chuck Berry, Duane Eddy and the inventive oldtimer, Les Paul, had long been experimenting with tremolos, echolettes and other such techno music toys, but these gimmicks were usually utlized for the odd temporary effect. Not until Dale began promoting himself as a surf guitarist and calling such sustained electro riffs ‘surf music,’ was this pecular sound given a popular or proper generic name.

Here again we see Dick Dale given a nod for both the sound, and the name of surf music. Wikipedia has a take on this as well:

By the early 1960s instrumental rock and roll had been pioneered successfully by performers such as Duane Eddy, Link Wray, and The Ventures. This trend was developed by Dick Dale who added the distinctive reverb, the rapid alternate picking characteristic of the genre, as well as Middle Eastern and Mexican influences, producing the regional hit “Let’s Go Trippin’” in 1961 and launching the surf music craze.

Beyond simply the sound of surf music, part of what made a song a “surf” song was the strong association with surfing, California, beaches, Woodie cars, etc. 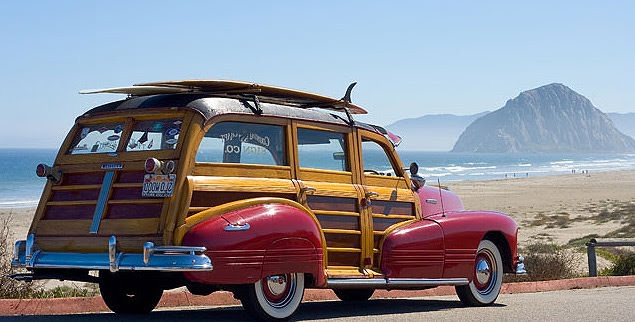 Woodie Car at the Beach with a Surfboard

Kahuna Kawentzmann also dives into this distinction between surf music and other forms of instrumental rock. He breaks them into surf, indo rock, eleki (largely Japanese), Asia a go go, European rock instrumentals, Latin American, biker movie soundtracks, and the pioneers. Definitely worth a read.

Fast forward to the present, songs are still being labeled as surf rock. A number bands, along with the surfy soundtrack of Pulp Fiction, helped renew surf music in the 90′s such as Man or Astroman, the Mermen, the Blue Stingrays, and many others. There are some bands, the Torquays and the Eliminators, for example, playing largely the classic surf sound. But there are also modern bands that have much in common with rockabilly, punk, space rock, and other genres. From Phil Dirt:

Many of the bands that perform surf now are pushing the envelope of what surf music is. To borrow a band name from Teisco Del Rey, they are the “Lords Of The New Surf“. These new bands have stayed with the original instrumental genre as a foundation, shunning the vocal pop that diluted and polluted it over 30 years ago. They have infused new life via the combination of their healthy respect and love for the pure instrumental form, and varied approach incorporating many influences.

Here’s a good look at what’s involved in being labeled “Surf Music” today from Pitchfork Media:

Somewhere along the line, surf music ceased to have anything to do with actual surfing and migrated to kitsch. But although shuddering tremolo bars fit the image of a guy in floral print trunks, the music is mostly instrumental and as such essentially abstract, so you can make it mean anything you want it to. Even early surf rockers like the Ventures and the Tornados realized this and began to incorporate the astronautical, lounge, and kitsch elements that color most efforts in the genre these days. So the term “surf” as it relates to music today basically just refers to music with lots of reverb and crazy guitar playing…”

Surf music today seems to have less to do with surfing than references to robots, monsters, outer space and any other weirdness you can think of. This is a good fit with what as El Surfadero said the other day – every surf band has a bit. So if you want to be a surf band today, slap on your Mexican wrestling mask, give yourself a cool name, and set your reverb on 11.